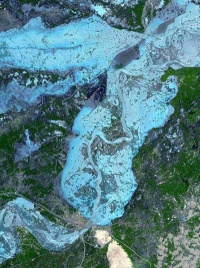 A satellite image of the monstrous flooding in Pakistan, 2010.

The recent devastating floods in Pakistan are the worst in the country's history and is the worst disaster ever seen by the current United Nations General Secretary, Ban Ki Moon.

A massive volume of rainfall has caused rivers to overflow and a third of the country to become submerged. Three weeks into the disaster, at least 20 million people have been affected by the devastating floods, with 6 million made homeless and 8 million in urgent need of humanitarian assistance.

Modern prophet Billy Meier foretold events such as these as far back as the 1950s with the following excerpt obviously now corroborated as truth:

Storms, ranging from heavy to the heaviest will, from now on, until far into the Third Millennium, bring unspeakably much misery, need and suffering to the human as has never happened since time immemorial.

The most severe earth and seaquakes will take effect with primeval-like force and demand millions of human lives, as also will deluge-like masses of rain that evoke monstrous flooding and cause mighty destruction as the human has never before collectively experienced or seen.
Source: Warning to all the governments of Europe! 1958, paragraphs 28-29

The cause of this extremely high volume of rainfall is already known by Earth scientists to be a change in the global distribution of rainfall, itself caused by an increase in the volume of carbon dioxide in the atmosphere, itself caused by the emissions from an increased human population, an overpopulation. The only solution to prevent disasters such as these, and others of an even worse form, is global birth control to reduce the population of the Earth to a sustainable level. One such level is 529,000,000; the optimum population for our planet, considering factors such as the amount of arable land available and required land per head. This is the population we should strive for if we wish for all of us to be sustained in abundance, not just the few.

Of course, all Earth humans are equally responsible to correct our current population level but how can we correct it if do we not know what caused it? What are the root causes of this type of disaster? There are many. The Christian teaching to go forth and multiply is one large contributor to population growth; the Catholic teaching to avoid contraception is another: just look at Mexico City and Buenos Aires and others like them, would you like to live there? I certainly would not. We procreate when we are not ready to raise children, psychologically or financially. The skills needed to prepare ourselves for creating a family are not taught in schools, in the UK at least. We also procreate as an afterthought to sexual desire. This is another aspect to a lack of realisation of the immense responsibility that parenthood brings. There are plenty of other idiotic reasons why the population keeps on growing globally and they are too numerous to list here but a global birth control law is the only solid solution that I can see actually reversing the global population trend.

Which governments or political parties would support a global birth control law? I'm sure most political parties cannot see further than their projected economic growth and income tax charts ("its good for the economy") but there are ways that we the people can force a population reduction. In addition to discussing this with others and adhering to good rules on procreation yourself, there are political parties in existence that we could bring to power such as the "Green" parties. In the UK, The Green Party is one such party that advocates a limited and sustainable population. There are many others like it in Europe and around the world. I urge you to find and vote for them.

A logo of the Green Party of England and Wales. A political party worth voting for in that area of the world.

What will happen if we do not stop the population growth? Will we all end up living in claustrophobic skyscraper apartments or capital slums under a totalitarian authority? Will all the fish in the sea die and become replaced by a super cloud of algae? Will the sea level rise enough to swallow every coastal town and city around the world? Will there be natural disasters of biblical proportions all around the world? I think the answer to all these questions is yes.

There is always hope but before you go back to your nice soft armchair and cup of tea, imagine a world where 100 million homeless and hungry human beings decide to emigrate by force to their neighbouring countries because of a natural catastrophe. What would result? Is a world-wide conflagration inevitable? Given the choice of global war or birth control what would you choose? It's a no brainer right? However optimistic you may be, without a doubt we are in for a very rough ride this century indeed.