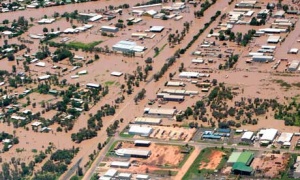 The flooded Queensland town of Emerald

News organizations around the world such as the Guardian newspaper describe the recent floods in the Australian state of Queensland as reaching "biblical" proportions.

The worst rains for 50 years have caused 6 river systems to burst their banks and this has resulted in half (850,000 square km) of the large state of Queensland being covered by water. Queensland is an area 1,700,000 square km in size. The area flooded being about the same as France and Germany combined. Around 200,000 people have been affected, approximately 400 homes submerged to at least ground floor level, more than 20 towns have been isolated and 1 woman has died so far.

It could take weeks for the water to drain away and the town of Rockhampton, population 75,000 is next in line to be inundated by the flowing flood water as it travels downstream eastwards towards the coast.

It is quite appropriate here to mention that Billy Meier sent warning letters to governments and other organisations on multiple occasions, at least in 1951, 1958 and 1964 describing events such as this. Virtually all did not respond and now you can see that whatever action they took, if any, was completely and entirely inadequate. The worst part of it is that this flood is probably a minor one when the future is considered.