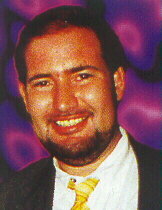 Michael Hesemann (born March 22, 1964 in Düsseldorf) is a German journalist and author. In the late 1980s he became known in Germany as an author of several books on UFOs and extraterrestrial visitors on Earth.

At some point in his early career he investigated Billys UFO claims. Harsh attacks and weak evidence and Contact Report 251 references Michael Hesemann.

Later in his career it is claimed he turned to topics related to Catholicism.[1] A claim particularly hard to believe was the case, given his exposure to Billy Meiers UFO information.

He is not a pure-created one, Ptaah said it himself.

Errors in the Contact Reports related to this person

Source: Extract from Plejadisch-plejarische Kontaktberichte, Block 8, Contact Report 261 page 4 lines 14-17.
FOM Note: The errors in the Contact Reports are more like typos in our opinion, even if they fundamentally change the meaning.

14. By the way, in some original contact report pages you have some mistakes that you should correct.
15. For example, with Michael Hesemann, you wrote, "He is a pure-created one"; But it would've been “he is not a pure-created.”
16. You have also written the name Randy Winters several times instead of Adrain-winters, including where it must be called simply Adrain.
17. I have also noticed a number of other mistakes that you should correct.
(Ptaah from 24/02/2005: Contact reports from the first contact of January 28 1975 have been corrected and revised together with Ptaah, to rectify the errors in the corresponding reports, which will continue to be the case for all subsequent contact reports too.)