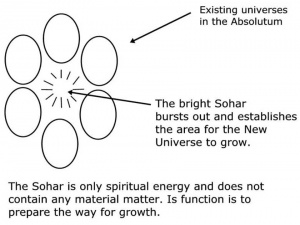 Also written as "Zohar". Sohar means "splendor" or "radiance". It represents an as yet to be discovered scientific phenomenon.

In the Talmud Jmmanuel, Zohar is defined as, the radiant splendor of spiritual-Creational energy.

10. There he saw the initial forefathers, the saints of ancient times, who were the celestial sons and the fathers of the terrestrial humans.
11. From there he went to the North towards the ends of the Earth, where the metallic lights and chariots of fire came down from the sky or shot upwards with a singing sound, enveloped in smoke and fire.
12. There, at the ends of the entire Earth, he saw a great and marvellous wonder.
13. In that place he saw the celestial portals open, of which there were three different ones.
14. The celestial portals radiated in the most brilliant Zohar an area as large as the lifeless sea on the river Jordan.
15. Actually gleaming therein was the entire land of Israel, alive and true, humans and animals and everything that was there.
16. In this first celestial portal, no secret was concealed, because the Zohar entered into the smallest spaces in the cottages and revealed the last intimate detail.
17. Inside the second celestial portal, there rose mighty mountains, whose peaks reached into the sky and disappeared into the clouds.
18. Far below lay deep masses of snow, at whose edges a different, brown skinned human population built their huts.
19. The third celestial portal revealed a land of gigantic dimensions, mountainous and interspersed with rivers, lakes and seas, where yet another human population dwelled.
20. Not far from these three celestial portals had been built the palace of god, the ruler of these terrestrial humans and of those who had travelled from afar, the celestial sons, the guardian angels.
21. In his palace, god ruled over the three human lineages created by him and over his following, the celestial sons.
22. He was immortal, ancient and of giant size like the celestial sons.
23. In the palace of God, there appeared to Jmmanuel two very tall men, the likes of whom he had never seen on Earth.
24. Their faces shone like the sun, and their eyes looked like burning torches. From their mouths issued fire. Their clothing resembled a covering of foam, and their arms were like golden wings.
25. They inhabited an environment of their own, because the air of this earthly world would have been fatal for them.
26. These two men from the constellation of the seven stars were venerable teachers, and they were together with two smaller men who said that they were from Baawi.
27. They said: "People have come from the heavens to Earth, and other people have been lifted from Earth into the heavens; the people coming from the heavens remained on Earth for a long time, and they created the intelligent human lineages.

The SSSC has a meditation area which is called the Sohar Centre or Center, sometimes capitalised as SOHAR which is written Sohar-Zentrums in the German. The conversations that reference this meditation space are broadly private and relate to FIGU group matters. The space is used for Peace Meditation.