Revision as of 03:10, 6 February 2020 by CMossman (talk | contribs)
(diff) ← Older revision | Latest revision (diff) | Newer revision → (diff)
IMPORTANT NOTE
This is an unofficial and unauthorised translation of a FIGU publication. 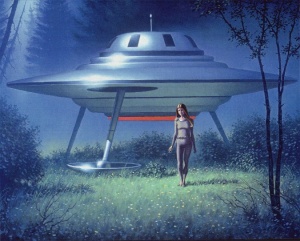 "A lady from the stars" by Jim Nichols

Semjase describes the human being Quetzalcoatl and the location of Greater and Small Atlantis and Mu.

This is an extract of the contact report. It is an unauthorised and unofficial translation and may contain errors.

.....There was put to me the question, who was Quetzalcoatl? And is Quetzal identical to him? [It should be noted that the names of 'Pleiadians' given Meier for identification, are not the real names of those extraterrestrial humans, because their names, in their own language, simply are not pronouncable in articulated form.]

181. I can answer the second question by "no", nor do any of Quetzal's forefathers belong to Quetzalcoatl. 182. Quetzalcoatl had been, in Earth terms, a very high officer or a high supervisor of an extraterrestrial group, which was active in the region you today call Egypt. 183. But he was very knowledgeable and wise, and thus was often assigned special missions, of which one brought him to South America, where he became venerated as a god by the Aztecs. 184. Since he possessed a small ship this impression of the Aztec people was strengthened, but this was not his intention. 185. When he first met together with another commissioner, a certain Huitzilopochtli, he changed his conduct. 186. Huitzilopochtli was one of the leading Gizeh Intelligences and he exercised a bloody sacrifice-based governance over the Aztecs. 187. He was insatiable in this respect, and demanded human blood as sacrifice, while Quetzalcoatl was against such. 188. In this way an evil enmity rose between them, and each of them tried to gather the government above the nations. 189. By wicked deceit and deceptive machinations Huitzilopochtil succeeded in expelling Quetzalcoatl, in consequence of which he fled and returned to Egypt.

This should be sufficient for this question. Can you tell me now, where exactly lay Atlantis?

190. For a long time already I have wanted to report on that. 191. Atlantis was divided into two governments. 192. Greater-Atlantis was situated between the separated continents of America/South America and Europe/Africa, while the smaller Atlantis was in then in the Santorini region. 193. Greater-Atlantis was damaged by war activities with the inhabitants of Mu, which was in the place of the Chinese Gobi desert, and [Greater-Atlantis] sank into the sea. 194. But Mu was also destroyed and ceased to exist, in consequence of which only the underground city of Agarta remained alive. 195. Small-Atlantis was destroyed around 6,000 years later...

.....By this you have answered a further question for me, which is for this Mu, namely where it was placed. Now this only leaves the question what Mu actually was.

203. Mu had been a land, and the capital of that land. 204. Mu was a country like all others. 205. But extraterrestrials had built the town at the surface as well as the underground city of Agarta, of which each was governed by a man and a woman. 206. Neither the land nor the cities were of special importance, except that they had been constructed by extraterrestrials from the Lyra-System, and were colonised, and also were destroyed again.

This is a segment of contact report 55 in which Semjase explains that Earth, too, is a living being that evolves

In this segment of contact report 55 Semjase explains to Billy that hierarchies signify a world of authorities subjugating people, not allowing them to realise that they themselves generate the power through which everything becomes possible.

115. Especially the human being of Earth is still unable to be independent and to develop independently due to the traditional false teachings and subjugations of every kind and form. 116. He/she is not even halfway reasonable in this respect. 117. Although he/she is again and again taught the truth that in every respect he/she alone is responsible for all events that affect all areas of their life, they want to continue to live in their old heresy forms and make higher 'spirit forms' responsible and set them above themselves, while still committing such outrage that it already perverts [degenerates] into unreality, for he/she dares to elevate human beings of the Earth to the status of masters, to whom he/she assigns near perfection and whom he/she powerfully, yet unrealistically and evolution-hinderingly, if not self-destructively, sets above himself/herself.