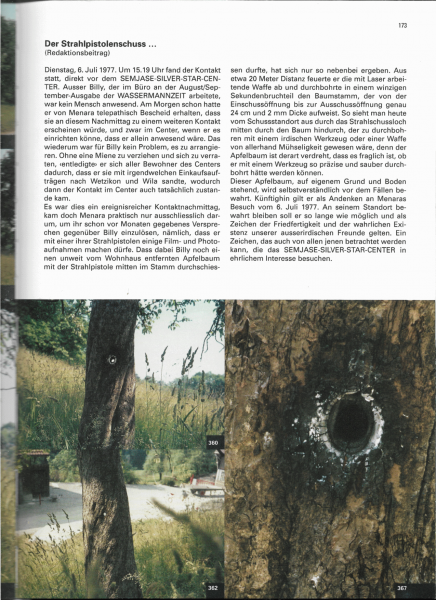 Tuesday, 6 July 1977. 15.19 hrs. the contact took place, directly in front of the SEMJASE-SILVER-STAR-CENTER. Apart from Billy, who worked in the office on the August/September issue of WASSERMANNZEIT, nobody was present. Already in the morning he had received telepathic notification from Menara that she would appear that afternoon for another contact, in the Center, if he could arrange for him to be there alone. That in turn was no problem for Billy to arrange it. Without making a face and betraying himself, he "got rid" of all the residents of the center by sending them to Wetzikon and Wila with some shopping orders, which actually made the contact in the center.

It was an eventful afternoon of contact, since Menara came almost exclusively to keep her promise to Billy, made months ago, that he would be allowed to take some film and photo shots with one of her blasting guns. The fact that Billy was allowed to shoot through an apple tree not far away from the house with the ray gun in the middle of the trunk just happened by the way. He fired the laser gun from a distance of about 20 meters and in a tiny fraction of a second he drilled through the tree trunk, which is exactly 24 cm and 2 mm thick from the point of entry to the point of exit. This is how you can see today from the point of the shot through the beam hole right through the middle of the tree, which would have been very difficult to pierce with a terrestrial tool or a weapon, because the apple tree is so twisted that it is questionable whether it could have been pierced so precisely and cleanly with a tool.

This apple tree, standing on its own land, is of course proven before felling. In the future it will be a souvenir of Menara's visit on July 6, 1977, and will be kept in its place as long as possible as a sign of peaceableness and the true existence of our extraterrestrial friends. A sign that can also be seen by all those who visit the SEMJASE-SILVER-STAR-CENTER in sincere interest.

You cannot overwrite this file.

The following page uses this file:

This file contains additional information, probably added from the digital camera or scanner used to create or digitize it.

If the file has been modified from its original state, some details may not fully reflect the modified file.