The Giza Intelligences, also known as The Bafath, are a group of humans that desired since ancient times to attain supremacy over the Earth humanity. 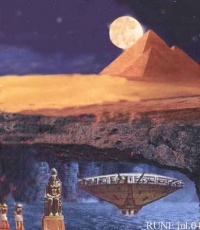