Goblet of the Truth (book) 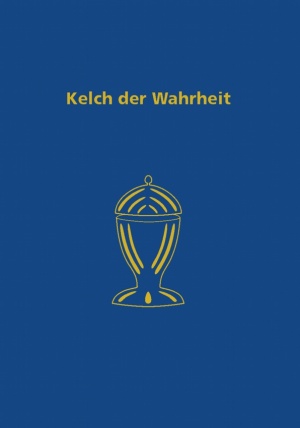 The book of the entire Teaching of the Prophets

In this book, ‹Goblet of the Truth›, the true prophet of the new time, ‹Billy› Eduard Albert Meier, known as BEAM, is once again providing the human beings of Earth as well as extraterrestrial races and peoples with a very signifi- cant work of truly universal uniqueness. Originally, he had intended to undertake this eminent and highly expressive transcription in the year 2017. However, for important health reasons, he was induced to set down this extremely valueful written bequest, indeed one that is steeped in history, at an earlier stage. The first lines originated on Sunday 19 August 2007. After only 5 months and 17 days of intensive work, he completed the task on Tuesday 5 February 2008.

In the course of these 171 days, concealed from our hectic and restless planet and in the seclusion of the Semjase Silver Star Center at Hinterschmidrüti, and during many nights, a epochal manuscript comprising 260 A4 pages was created. This work, being only a provisional conclusion of Billy's untiring work, is in its bound form structured as a long series of highly instructive pearls of evolutive shine which have been penned by his hand to date, and which form the psyche and the consciousness. The very short time taken to complete the book even surprised his extraterrestrial friends, since they had themselves expected the completion to require several years. The tome comprises a total of 28 chapters.

Goblet of the Truth