“ Many frauds and charlatans claim to be in contact with human beings from other planets in your solar system and even to have flown with or in their beamships. This is nothing but a lie, for most of the stars they mention and their planets are so desolate that human life cannot exist there. 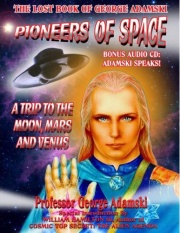 He was a contactee with Venusians (Venus) who submitted film footage of flying saucers, starship photographs, a piece of a flying saucer, six witnesses supported the reality of his contact by signing an affidavit.
He wrote about Nordic Aliens in his books 'Flying Saucers Have Landed' and 'Inside the Space Ships'.

He filmed starships. No human beings on Earth maintain any contacts with extraterrestrial intelligences. Therefore he is a liar, fraud and cheat.

He submitted photographs, starship footage, a plant with extraordinary characteristics, claimed he had witnesses.
He wrote about Nordic Aliens in his book 'From Outer Space to You'.

Relevant reading
...and many, many more, there has probably been one in most towns and cities all over the world, we have not the time to research and check this much, always plenty of fraud. A big fan a’ bull example, at random say Peter Maxwell Slattery (YouTube external link) - persons who have read abit about Billy Meiers 40 year running story or from some author that has, ephemerally stood it, but then decided to load wrap a steaming hot piling pastiche heap of horse dung onto and around it to make it their own.

Dana Rasinova from Exopolitics (Czech) weighs in:
"Many contactees have not been allowed or are not enabled to prove their contact unambiguously by their alien contacts for various reasons, such as security. Apparently it concerns the arranged global extraterrestrial tactics for their operation on Earth. Naturally, there does exist swindlers and false contactees, but I think the real ones are more than one as they say. This is also the question of logic that suggests more than one.

I consider the Pleiadians want to attract more attention to themselves – steal the limelight so to say – and to Billy Meier, and to their spiritual teaching on the very beginning of their mission. The Pleiadians are prepared to subordinate their interests for the above mentioned reasons. They don’t want to shatter their supporters‘ attention to someone else. That’s why they expediently divert attention from other contactees especially from those who are significant. That’s precisely the reason why they proclaimed directly important contactees such as George Adamski as deceivers. They argued that he had manipulated his witnesses and that he never photographed any spacecraft...

...Draconians (Dracos) and Reptilians are believed to not exist; The Pleiadians standpoint [is they] claim that Reptilians don’t exist." she writes.

By the by on the subject of the so-called 'exopolitics', 'Ohio exopolitics' is an interesting one, https://www.exopoliticsohio.us/ they've gradually turned toward Billy Meier exclusively. Now all they need to do is drop the name exopolitics and any other rubbish they're carrying from exopolitics which they've mixed in and they'd be getting there.

“ Although many frauds exist, there are many who really have had, and continue to have, contact with us. But a great many of those have never had more than just visual contact with us. Contactees, therefore, who have only seen our beamships from a distance and were often able to take pictures as well. Only very few of them have had personal contact with us, which is the case even now. Most of them wrap themselves in silence, in fear of their fellowmen.

He submitted 'starship' photographs, film footage of ships and physical evidence – a circular disc 8 cm in diameter made from unusual elements. But he later destroyed them; somebody made forgeries of them and attributed them to Fry. This is supposed to be the reason why none of Dan Fry's real photos of alien flying objects exist any longer. Even the story about the origin of the extraterrestrials and their accounts was apparently thoroughly distorted.

He spread the images and experiences and so forth which were implanted in him by means of holographs and dream-state-hallucinations, in order to maintain the religion of Christianity - Asket's Explanations - Part 1

Relevant reading
There are many more who crop up through out the Contact Reports e.g. impulse-telepathic like Foo Fighters, or a few words were exchanged e.g Horst Fenner's encounter in Bolivia 1976' or a brief sighting e.g Jordanian desert or brief encounter while with Billy e.g Jitschi etc., there are many actually, thousands. Michael Horn on http://www.theyfly.com/ and https://theyflyblog.com/ has talked all about the relationship and ideological opposition between what Billy Meier has explained compared to the UFO industry.

...As far as we are concerned, except for your case, there exist no other contacts, not even in a telepathic form. The contacts we maintain with people on Earth are of a purely impulse-telepathic nature. For this reason, the contactees are unaware of the contact; they assume their accomplishments result strictly from their own initiative. Truthfully though, the information relating to their achievements, items produced, and other matters, is generated by us and instilled into the individuals through impulse-telepathy, and in every case their consciousness is unaware of this fact. They definitely have no idea that such information, etc., is instilled in them through impulse-telepathy.[1]

...we made the effort to transmit the entire necessary specifications for the design to terrestrial scientists through impulse-telepathy so that, out of that, flying disks could be developed.[2]

Real contacts were made only through impulse contacts through a telepathic transmission device with which we usually contacted various and higher educated human beings of earth to provide information, however, these people did not know that we were contacting them in this manner, neither did the many scientists - for example Einstein and other notable human beings of earth - who we provided information in the same way, which have led to progress in technology and medicine etc.[3]

Could you tell me did Semjase contact any people in Tibet during her stay on Earth in the past few centuries? If yes, could you tell us the year and name of the contactees?

[With] respect to Kenneth Arnold we have found out through our three-year investigations that he did not observe any extraterrestrial flying objects but secret US test flights of one-winged aircraft. This is also true for various other cases of that time, which, however, was not only limited to the USA but also took place in other countries that tested futuristic aircraft, which still happens today.[5]