Difference between revisions of "Randolph Winters" 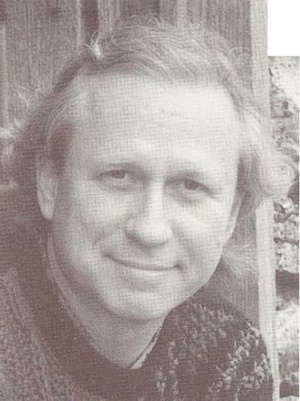 Photo of Randolph Winters included in his "Pleiadian Mission" book.

Randy Winters - Author of many Billy Meier subject related books. Held many talks, lectures, seminars and presentations. Visited Switzerland and the SSSC many times, interviewed and learnt from Billy Meier all the way up in the mountains at his home. The process of which commanded a large audience.

Randolph Winters is broadly credited with bringing the story to a large audience, making it interesting and exciting and he done well to do so the way he did. He seemed to appreciate the principle of the lazy ordinary person who seeks entertainment with minimal effort and commitment, and accordingly simplified the details (controversially), putting them on cassette tape, and summarised his own notes collected from what Billy explained to him to write his books, making it all easy to listen and read the case. The story of the so-called ‘Pleiadians’ has shifted around over the years, Randy’s version is one of the better accounts because he actually went to the Switzerland hills and spent time with Billy himself in person. Randolph also had access to earlier English translations of the Contact Reports in one form or another, back in the early 1990’s when he made his videos and talked at events.[citation needed] When the information was presented by him it was made more simpler than it actually is and ever has been, which proved a popular means of delivery. He made it accessible, kept it punchy, light and approachable. He spoke in a way which indicated he really knew the story from within, and that made it ever the more intriguing. The story was told by him using a recognisable and structured method of storytelling which audiences like. He paused, giving more information at the right times, with an information sequencing which built it all up. He wasn’t afraid of making executive editorial decisions, cutting out swathes of detailing in the interests of holding the attention of the audience. And he did it all calmly and under control.

He’s been popular around the world in a good way and still is even in 2020. He acted in a way that was appropriate to the particular circumstances. He is intelligent. Randolph Winters and Michael Horn knew eachother.[citation needed]

Adrain-Winters was coined by Florena in Contact Report 255, to refer to Randy's work with some fraudulent character called Adrain, and their work together i.e. Adrain-Winters-Werk.

Not many really know about this because it never reflected on the quality of Randy's existing work - Randy stopped working with Billy and FIGU - Regrettably he apparently knowingly got himself involved in an additional but fraudulent fictional alien story, motivated by financial gain, in collaboration with someone called Adrain. The Plejaren knew this was unravelling and were advising Billy. Adrain apparently told Randy his contacts had begun around 29 years before. Adrain said that he had been on board their ships and had taken photos as Billy had. The difference he told Randy was that in his case the contacts were for his own benefit and had not been asked by his version of the Pleiadians to make his meetings with them known to the public. He did not want to make his identity known and so strangely wanted Randy to write down his story in a commercially viable format and make it public in order that people might learn more about their ancestors from the Pleiades and how their knowledge could be useful to us here on Earth now they’re finally and at long last offering it through Adrain and that he would be there anonymously to guide Randy’s audience through the troubled times ahead providing they attend the lectures and sign up to the subscription. - All that is quite an assumption actually because we don't know exactly how it played out.

Presumably Randy in the process of learning about the information given by Billy Meier, realised Billy Meier was the only person and that the truth is not commercially viable and is therefore very difficult to sell. Maintaining the association with such a fictional alien story wouldn't have been acceptable or compatible with FIGU, because it breaks a core founding principle of moral efficacy; exploiting vulnerable persons and forgetting compassion, one of societies founding principles. Such fictional story cases run in entirely the opposite direction to Billy Meier's information and its inherent association with the truth, ideological opposition. It's not possible for a professional speaker to have Billy Meier on their portfolio in combination with any other, because there are no others, and Randy knew that fact, as Ptaah explains here below.

Billy: Tell me: On the 13th of February, 1996, Florena mentioned to me that your investigations showed Randy Winters is not the only guilty party in matters pertaining to the fraudulent, purported contact story in Miami, Florida, and that there actually exists a man who makes these deceitful contact claims. Furthermore, this Adrain collaborates with Randy Winters who, in turn, cheats him and capitalises on this liar and fraud by commercially exploiting Adrain's material for profit.

Ptaah: That is correct, this is precisely what is actually transpiring. Winters is utilising the falsified material of this Adrain, as he calls himself, in order to enrich himself although he basically knows exactly that the entire matter is nothing but lies and deceit. Winters is a profit-hungry scoundrel, and the same holds true for Adrain who makes every attempt to introduce himself to people with whom he can collaborate and capitalise from his fraudulent story. As for Winters, he now exploits this Adrain in the same manner he has applied to your material, albeit with one big difference: Your information and contacts are the truth, of which he is fully aware, while the Adrain story is a ruthless lie, fraud, deceit, and charlatanry, and Randolph Winters is fully conscious of this fact as well.

Randolph Winter’s abandonment of further Billy Meier explanatory and representative works, is generally considered to be a good neutral-positive outcome. In the sense that the moral suasion of the thing has historically put many off following in Randy's such footsteps, rightly so. Even though he was a good speaker and presenter, because the world is a place better off without even more unreal stories, designed to swindle folks from their hard earned money.

Whichever way it pans out for Randolph Winters, he was a pioneer, UFO's were not much known about before his generation and plenty of folks still appreciate him for the work he put into investigating the Billy Meier UFO case and passing it over to an audience in the good way he did. It is easy for us to look back on the rapid succession of achievements and assess reality-estranged naivety, because we have those progress achievements to reflect upon now. Whichever way we look at it he was a part of the progress that was happening and has happened. 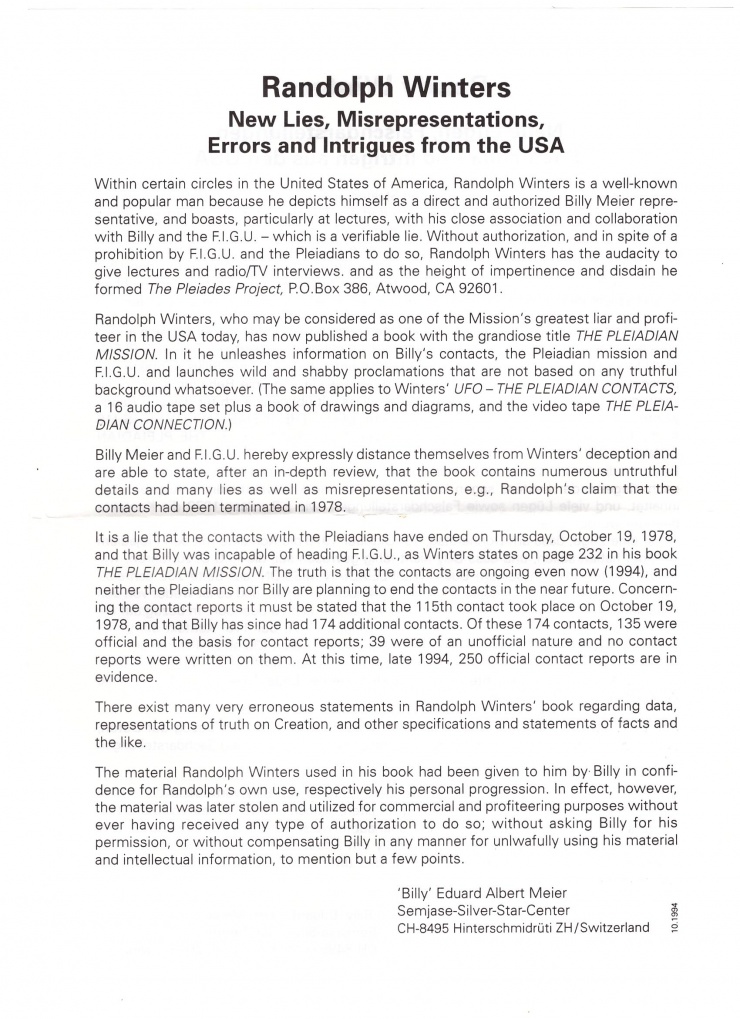 Whatever your opinion of Randolph Winters, this FIGU document makes it clear that BEAM, FIGU and Plejaren don’t want the story told the way Randy did it.