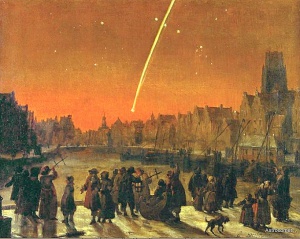 Contact Report 150 explains the origin and provides details including the past dates when it caused problems within our solar system. The last fly past by the Destroyer was in 1680. If this is correct, it is likely that it is the comet we know as "The Great Comet of 1680": The first ever comet discovered by telescope.[1] Contact Report 150 also states that the volume of The Destroyer is 1.72 times that of the Earth but the weight has been reduced to the average mass of the Earth. It also rotated at a velocity of 314.7 m/s at the equator compared to the Earth's 465 m/s. (This is information from the year 1981).

Since Contact Report 251 took place in 1995 this means that it will next visit our solar system in the year 3175.