Difference between revisions of "Wally Gentleman"

Wally Gentleman had been involved with special effects for over thirty-five years. As a teenager in England he had begun his film career developing techniques for "shooting down planes" by using photographic images on a dome. He studied animation and eventually joined the special effects team at the famous Pinewood Studios in Buckinghamshire, working with rear projection and using photographic means to create backgrounds and avoid expensive sets. From England he emigrated to Canada in 1957 to serve on the National Film Board for ten years as director of special effects.

While in Canada in 1961, Gentleman made a short film of mostly visual effects titled Universe, which was later discovered by Stanley Kubrick, who contacted Gentleman: He wanted to utilize the techniques Gentleman had created for Universe in his new film 2001. For the next year and a half, Gentleman had served as director of special photographic effects for the Kubrick film. In 1977 he moved to Hollywood and, among other projects, served as an expert visually re-creating actual flying saucer reports on the new Jack Webb series Project UFO. "You can build a model to fit a certain background, even though it's a scale size," Gentleman said. "These are called 'foreground hanging miniatures' in the trade. And if you do it very skillfully, no one can tell the difference. But the skill that you need for that is really quite specific, because when you reduce the size of a model you are still building with full-sized textured pieces of wood, plastic, whatever. The trick is to render a model with the right microscopic textures that will fit the true scale of the situation. And then you have to worry about things like the scale of movements, the movement of the background, the simultaneous activity that's going on. Models that are done badly show up like a sore thumb."

In early 1980, Bill Jenkins, who hosted a popular Saturday night talk show on KABC radio, Los Angeles, called Gentleman. "I have some interesting stuff to show you," he said. "Can you tell me if it's authentic?" At the time, Gentleman worked for Film Effects of Hollywood. When Jenkins brought by the photo journal, UFO - Contact from the Pleiades, Gentleman perused the photos and told Jenkins, "I'd like very much to see more of this." With Jenkins's help, Gentleman located the Lee Elders in Phoenix and a few weeks later flew over to meet them and to view their video tape of Meier's movie footage. After watching each of the eight segments several times, he said to the Elders, "They have a ring of authenticity. But I'd like to examine them to be really sure."

In addition to examining the films, Gentleman subjected several of the Meier photos to "perspective interlock," a drawing board geometric analysis which he had applied in the independent frame process at Pinewood Studios. If Meier maintained that the beamships he had photographed measured approximately twenty-one feet in diameter, Gentleman could take the size of a known object in the scene, a measured tree trunk for instance, and locate where in the scene a beamship of that size would have to be. The photograph could appear to be authentic, but perspective interlock would expose subtle inconsistencies. Placing the photos on his drawing board and then tracing perspective lines, Gentleman calculated that the beamships were exactly as Meier had said they were, in size and location. 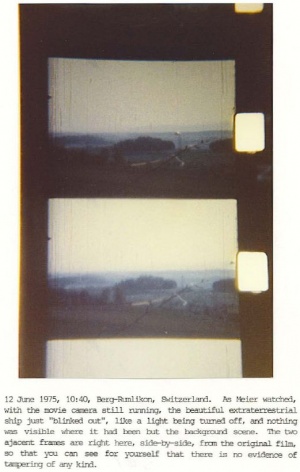 One of the film negatives, see Gallery.

"My big problem area with the Meier pictures," said Gentleman, "is that I have never seen an original negative. And without that I could never really be sure that it had not been doctored in any way at all. But given my particular background, I know it would take an expert of many years of experience even to doctor a picture to make it look authentic." Holding one of the Meier photos in his hand, Gentleman said, "My greatest problem is that for anybody faking this [he points to the photograph], the shadow that is thrown onto that tree is correct. There are many things that are correct on many of the shots. Therefore, if somebody is faking them they have an expert there. And being an expert myself, I know that expert knowledge is very hard to come by. So I say, 'Well, is that expert knowledge there or isn't it there?' Because if the expert knowledge isn't there, this has got to be real."

Gentleman explained that if you throw a model into a scene it will be frozen by the camera in a certain position, and the scale of the lighting on the model's surface (the angles and intensity of reflection) will indicate its small size and its relatively close proximity to the camera. Besides, he could see no way for a one-armed man to throw three or four models into the air at once and photograph them. "Some of them are behind the twigs on a tree," he noted. "You've got to be some special effects man to do that, I can tell you. And the objects that were behind the tree appeared to be at the right distance for ships that were a long way away. That's called 'aerial perspective.' When you look at mountains you see different colours that deepen in blue as you go farther away, and all of these photographs had that aerial perspective indicating distance. If you threw a lot of little silver things in the air at once, they'd all be lit within the space that you could throw them, which might be, what, twenty feet? But these certainly had the aerial perspective in the change of hue and tone on them. If the photographs were a 'cheat,' they were superbly cheated, but I don't think they were."

After studying the films, Gentleman concluded that considering the expertise necessary, the logistics, and the expense, a one-armed man with no assistance could not possibly have produced the footage. "That's the bottom line of everything," he said. "This Meier really had to have a fleet of clever assistants, at least fifteen people, who would know what the interface reflections of a shiny object were at certain times of the day, how to support these objects so that wires are not seen, how to rig it, how to watch it and stand by with their little air guns to spray the strings when they begin showing up.

"What we would do is go out and shoot the scene, and then bring it back to the studio, and then shoot the object onto that film by duplication processes, which is a very sophisticated procedure. It's difficult to do on 35mm, even worse with the 8mm film he was using. And the equipment was totally out of his means. If somebody wanted me to cheat something along those lines, $30,000 would probably do it, but this is in a studio where the equipment exists. The equipment would cost another $50,000. "I think the one telling part of all this is that a single man with one arm, if he indeed was on his own, could not have done it. I think it would be well nigh miraculous for a person with even two arms to do that sort of work by himself up on a mountaintop. Even if you get a balloon and you hang your object on a fine piece of thread underneath, it's going to blow in any direction it wants to go. And with a lot of those pictures where you've got three or four flying saucers, you would need balloons with strings of varying length, otherwise you could pick out where the string comes from. It would be very difficult to do those shots in that sort of condition outside. And the fall of the land make s it very risky to do anything like that. It's all that sort of complication that leads me to think that the objects he's photographed and filmed were there independently and he simply snapped the shutter."