The Talmud of Jmmanuel

Jerusalem, 1963 - A Greek Catholic priest, Isa Rashid, discovers a small cave in the slope of a nearby hill. His Swiss friend, "Billy" Eduard Albert Meier, removes the rubble partially obscuring the entryway, crawls inside, and exhumes a set of ancient scrolls wrapped in animal skin and encased in a dry, crumbly resin. Upon their examination, faded yet fully legible pages of Aramaic text reveal a 2,000-year-old biographical narrative of a man named Jmmanuel who devoted his life to teaching about the true nature of the universe, the immortality of the human spirit through reincarnation, and a way of life that is liberating and free from the illogical constraints of human greed and lust for power.

And this is the book that none of the major religions want you to read. Having translated 36 chapters of the scrolls from Aramaic to German, Isa Rashid ultimately paid with his life when he and his family were assassinated by the powers that be but not before 36 chapters were sent to his friend in Switzerland, who then assembled the text into the form presented in this book. (Meier's publishing of the Talmud Jmmanuel has been partially responsible for the 21 attempts on his own life.)

Discover what truly happened to Jmmanuel during his forty days and forty nights "in the desert." Learn who really was his betrayer and how he survived his brutal crucifixion. And read his ominous prophecies (some already fulfilled!) for the current times, his teachings about the human spirit and the self-determined path of human evolution - the true meaning of our lives.

This Fourth Edition, which has been edited by "Billy" Meier and members of FIGU, makes this publication of the Talmud Jmmanuel the most accurate version ever printed.

SPECIAL FEATURE: This latest edition [4th edition] of the Talmud Jmmanuel also contains the amazing, original prophecies by Jeremia and Elia, which had long since been removed from the Bible because of their astounding, heretical - and now verifiably accurate - content.

And this edition contains never before seen photographs of a small figurine left in the tomb of the crucifixion by the healers from India and a piece of a mineral that was a gift from Gabriel to his son Jmmanuel...both of which were left by Jmmanuel for Meier to discover!

(Note: The name Jmmanuel is mentioned, with different spellings, in the Old Testament, Isaiah 7:14: "Therefore the Lord himself will give you a sign. Behold, a young woman shall conceive and bear a son, and shall call his name Imman'u-el." And we find it again in the New Testament, Matthew 1:23: "Behold, a virgin shall conceive and bear a son, and his name shall be called Emmanuel." For further information regarding the genuineness of the Talmud Jmmanuel, please see the extensive research of James Deardorff at http://www.tjresearch.info/genuine.htm and related links at http://www.tjresearch.info/contents.htm.) 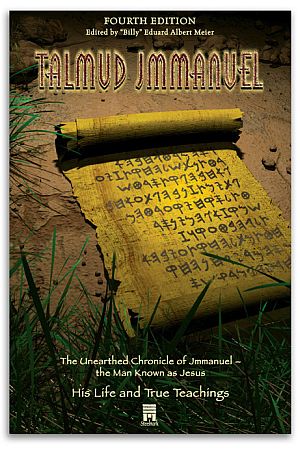